Yeah... I've totally plagiarised Michael Jackson's 'HIStory' concept to share MYstory.  I reckon It's OK because Michael still owes me a lovely hand built red Jamma I lent him in New York, while he was recording HIStory - back in the 90's ... 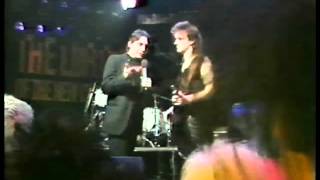 Ok... So back in 1985 when I was 23 (I still look the same) I was invited to demo the Rhythm Stick on The Tube which was broadcast live from the TV studio in Quayside in Newcastle. The Tube was a seminal anarchic British youth music TV show. It opened with The Jam and went of feature Madonna, REM, Frankie Goes to Hollywood, U2 and on and on… There’s a great BBC article about it's huge effect on British TV. In the clip here of me demoing the Rhythm Stick, they’ve removed a

Background to The Dynacord Rhythm Stick